Proxy bidding is allowed on this auction.  Proxy bidders high bid is unpublished and the system will bid for the bidder up to their high bid.  The system determines winning bidder based on when the high bid was entered.

The history on each item is not the determining factor in awarding the high bid.  This is just a log of bids and does not reflect the date/time a proxy bid was placed.

The system will alert you at the time of your bid if you have won the high bid at that moment.  If you are not alerted that you had the high bid, a proxy bid was placed earlier that outbid your bid.

PAYMENT:  An invoice will be sent to winning bidders from the auction site within 24 hours after the auction ends.  You have the choice to pay directly online with the link on the invoice, or you can contact deb@ahtimes.com or 952-228-8771 to make other payment arrangements.  All credit card payments are subject to a 3% fee.  Winning bids either not paid or have not had payment arrangements made with Deb by Wednesday, March 25, will have the card on file in the auction system run for the winning bid amount.

Purchaser is responsible for transportation from the horses location to it's new home. 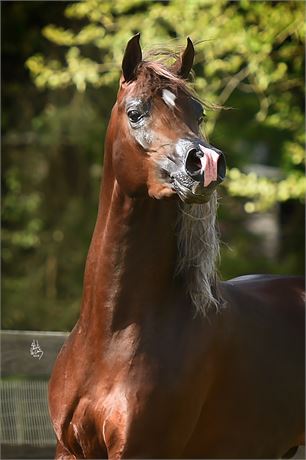 Payment Instructions
Payment due prior to shipment/pickup.
Details
Description

MB Quito has proven he will be a sire to be reckoned with; breeders have been known to say, “best filly I’ve ever bred”, “no baby has ever had so much animation”.

In addition, Quito is a lovely and willing under saddle horse; he trail rides and has been shown.